Curious to various portable antenna configurations, I started pondering an antenna that I would need in an event of an emergency, field day, or when I was just plain lazy.  Various manufactures flooded my browser when I goggled “Portable HF Antennas.”

I decided to squeeze down my criteria by utilizing eham and youtube for any further reviews and first hand experiences on antennas. I also did a quick list of what I wanted in a portable antenna.

Here is my criteria:

This lead me on my search and I was able to hone down a to a specific antenna type:

This promptly ruled out wire antennas, although I am a proud owner of a SOTABEAMS Linked Dipole.

So, cutting down to the chase, SurvivalTech Nord (OH8STN) and videosbymike, two youtubers that I keep my eye on regularly did some nice reviews on antennas. videosbymike and OH8STN did a review on Alpha antenna’s 80m – 6m Military vertical, although they did it at different times with different overall product versions. OH8STN actually did it on a version that did not get high praise, but did under go some upgrades that videosbymike eventually did obtain and review.  I was skeptical as well was my Elmer on this antenna.

So I placed the order with Alpha antenna for one of these antennas, which came down around $500.00.  A pretty hefty price for an antenna that I had nor known anyone around with experience.   I mentioned to Steve at Alpha antenna that I wanted to have it for winter field day.  To my amazement, he had it here to me (New York) by the next day (22 hours later!). I was very amazed at their turnaround time.   That is one green flag in their corner.

This antenna came very well boxed with irritating packing peanuts to boot. This antenna was very neatly packed with all components bagged in heavyweight plastic bagging (except for full metal jacket tripod).

I won’t need to go over it’s content since Alpha has a website for that purpose.  Very detailed information is contained on this site. 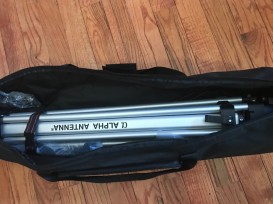 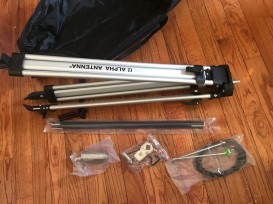 All components seem to be very robust and well constructed with high quality control in mind.

I was impressed with this antenna’s fit and finish.

I didn’t even bother reading the manual (yeah RTFM!) when I put this antenna together outside in 20 degrees Fahrenheit weather.  I was marveled at how easy it was. I did have to consult the manual after I set it up since I wanted to double check where each element needed to go.   That maybe one point of confusion if someone was given this antenna and expected to set it up on their own. Other than that, it is mostly self explanatory.  I won’t bore anyone with useless details, Just highlights and my thoughts.  Check other people’s reviews if you want a more in-depth discussion and dissection [that means you “troublemaker and resident ham pissy pants,” Dave B].

Winter Field Day Updates:  Setup during winter field day went smoothly as it did on my initial test.  However, I found this antenna to be quite dangerous with safety considerations.  Elements are not very visibly pronounced and did injure a few fellow hams during deployment of other antennas.  One thing Alpha antenna should do to this antenna is to somehow build in safety features into this antenna to prevent potential accidents.  I did use some survey tape to mark off this antenna’s directional element.

For these next few hours, probably up until 21:00 EST, I will have this antenna on WSPR 40m. So far, I have 39 local contacts.  Expectations are not high as this is not a DX antenna by my observations.  What I hope to come out of this is a reliable set of communications with national level contacts. Any contacts with DX stations is just a bonus.

Here is propagation data for bands for today. 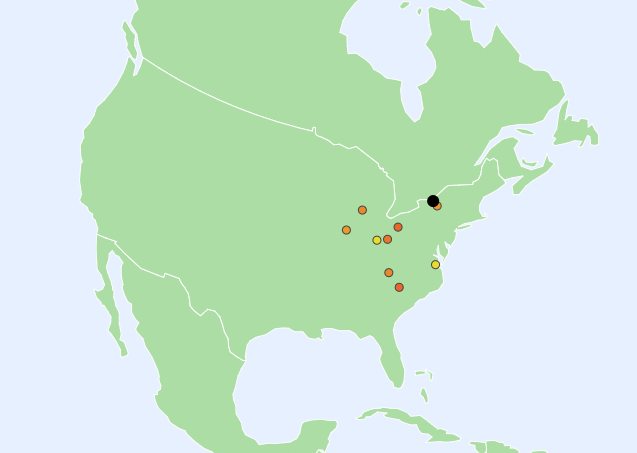 I decided to simulate an urgent need to take down my antenna due to a potential disaster or some other issue. I learned that in a real hurry, this antenna can be taken down in about 2.5 minutes.  Another green flag!

I will start my tests back up tomorrow morning very early to catch grayline again. only change is to hook this antenna to a run of coax in my house and see if that makes any difference.

01/27/2018 – 01/28/2018: I have decided to wait until winter field day for additional testing.  There was not much contesting during that time, and decided to use this time for antenna testing.  With that, at a different location I deployed WSPR at 5w on 40m.  Comparative data was established against a DXEngineering Transworld antenna. This is also a compromised antenna.

I was happy to see, after my changes suggested by Steve at Alpha Antenna, a much better outcome on this EZMilitary.

I was unfortunately unable to get any WSPR data for my elmer’s transworld antenna,  however, below the picture from WSPR on 40m with and without directional element deployed.

I also made several contacts mixed mode using PSK31, FT8, CW and phone.  I also made connections into distant winlink nodes with ease.  These were mostly local contacts.  I had deployed a SOTA antenna linked dipole for 20m and 40m and got several contacts in DX countries

I think this antenna is a good antenna for being compromised antenna.  It is most definitely effective and for rapid deployment, now rivals competitor antenna systems of a similar caliber.  I think safety is a number one concern here as this antenna is quite stealthy and hides it self well from human eyes, that can cause injuries to other people.

For me, not having another rapid deployment antenna that I can erect myself, by myself. This is an antenna will be adding to my cache. My linked dipole cannot be compared to this antenna because it is not automatically multi-banded and is solely resonant on either 20m or 40m.  Some manual manipulation is needed on this antenna to make it resonant on either band.